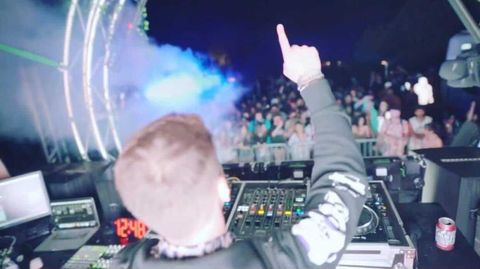 Wolvero’s knack for crafting quality house beats stems from a robust musical experience in his earlier years when he played in a heavy metal band. With a keen production prowess that’s virtually unmatched in the dance music landscape, Wolvero’s talents have seen him billed alongside high-profile DJs like Joyryde, Nero, Tony Romera, Bijou, Arius, and Wenzday. The seasoned San Francisco-based musician has also graced the decks of some of his city’s finest nightclubs like Audio SF, Mezzanine, 1015 Folsom, Midway and Temple.

Best thing you have ever seen someone doing in a crowd during your set?

One time I saw a group of people lift their friend who was in a wheelchair up in the air and everyone was vibing with them to the music it was beautiful.

Which artists inspire your specific sound?

I really resonate with Matroda, Drezo, and Dustycloud’s sound design and production style. I like deep and dark atmospheres.

When did you realize that you wanted to DJ?

Back in 2010 everyone in the metal scene was transitioning to dubstep pioneered by artists like Skrillex, Mt. Eden, and Cookie Monsta. The metal band “Attack! Attack!” Used a lot of synths and had EDM style breakdowns and this was really refreshing and new to me. I started DJing Deep House underground’s in Oakland in 2014 and transitioned to clubs shortly after.

Were you raving before you started DJing?

Of course! My first rave was Spookfest 2009 at the Cow Palace in San Francisco when I was 16.

Do you have any future releases coming up?

I sure do! I’m always sitting on a few unreleased tracks. I played out 5 unreleased tracks tonight at Oasis Fest and everyone had great feedback so far. I just released my Void EP on Play Records last month. It’s 4 tracks that contrast with each other and no two tracks are the same in terms of style or vibe. Stream or download it here: https://fanlink.to/PD5452

What is the reason you DJ?

The main reason I DJ is to have an outlet for the music I produce.

What specific feelings do you want your listeners to feel when hearing your music?

I would love if people would connect with my music in any way that they want. Wether that’s a feel good uplifting experience, or a dark and dirty experience. As long as they vibe with it in a way that they enjoy that’s all that matters to me.

What helps you come out of “artist blocks” if you have them?

I’ve been blessed to not run into writers block. When I sit down to write a track sometimes the track just writes itself and it’s automatic when I’m in the zone.

GET TO KNOW JAPANESE STARS AmPM